Investors who got into real estate in Charlotte five years ago are smiling right now as they have seen their home values appreciate 56 since their initial investment.

As of August, the median list price of a single family home was a healthy $350,000, a 20 percent rise from last year’s figure, according to Canopy Realtor Association.

And it’s not too late to get into the game, as those 100 or so people moving each day into North Carolina’s so-called Queen City can attest.

Why Charlotte real estate is attractive to investors

With a population of about 2.66 million, the metropolitan area is now the 23rd-most-populous in the U.S. Charlotte has been dubbed a “boomtown” and a “magnet” by real estate professionals.

The city was forecast to be number 11 in the country in construction activity in 2021 to meet growing demand, so there will be homes on the market for those looking to invest.

What’s more, renter-occupied households make up 41 percent of the housing stock, so there are plentiful opportunities.

All those people moving in find the sorts of amenities offered by bigger cities. There’s a good airport, NBA and NFL teams to follow and several top-notch museums.

Aside from the expected barbecue, Charlotte has a host of international cuisines, from Asian to Ethiopian and New American.

The city’s demographics are attractive for investors as well.

“Charlotte is the number one city in the country attracting millennials, because it’s one of the largest drivers for financial services,” says Thomas Stepp, director of investor services at Mynd.

Charlotte is the country’s second-largest financial center; Bank of America and Wells Fargo are among the city’s top employers.

The incoming millennials are the age group most likely to be renters; demand has pushed rents up 5 percent year-over-year.

The city’s economy is supported by the presence of seven Fortune 500 companies: aside from  Bank of America, there’s Honeywell, Nucor, Lowe’s, Duke Energy, Sonic Automotive, and Brighthouse Financial.

To pre-empt problems like traffic that often accompany growth, Charlotte has a strategic plan to give all households access to essential goods and services as well as amenities within a comfortable, shaded walk, bike ride or transit trip by 2040, bolstering the city’s livability index.

Addison De Mallie, Mynd’s Charlotte-based investment location manager, picked out 10 neighborhoods that are most promising for investors, some within the city limits, some outside the city proper.

(READ MORE FROM MYND: Millennials, and fintech, flock to Charlotte)

The best neighborhoods within city limits

“All these neighborhoods are suburban and are short commutes both to industrial areas of the city and for office workers,” says De Mallie.

Those who know Charlotte neighborhoods, says De Mallie, have heard of places like South End, NoDa, and Plaza Midwood. But don’t expect to be able to invest there now, he warns.

“That’s where the millennials want to be, but the problem is there’s not much rental inventory to be had there right now,” he says. “The first build-to-rent community was sold just recently. In five years, those neighborhoods will be hot.”

The four neighborhoods De Mallie suggests investors look at within city limits right now are all suburban areas that are “basically their own little cities at this point, each with easy access to major roadways.” Most are inside I-485, which loops around the city.

Near the campus of the University of North Carolina at Charlotte, this neighborhood has a good school system, anchored by Mallard Creek High School, home of the highly competitive Mallard Creek Mavericks high school football team.

Seven and a half miles from uptown Charlotte, Eastland is named for the Eastland Mall, which opened in 1975 with a million square feet of space and was the heart of the neighborhood, but it closed in 2010 with the downturn of the area and was torn down in 2013.

But officials have been waiting for the right plan to rehabilitate Eastland, and now they’ve settled on one. In November 2020, the city council approved a a mixed-use project featuring retail and office space, sports fields, housing and park space.

“The Carolina Panthers Major League Soccer team is coming to Charlotte,” says De Mallie, “and the old mall site will be home to the team’s headquarters and a practice site.”

Known to locals simply as Whitehall, this neighborhood straddles I-485 and has easy access to Interstate 77. “It’s just to the north of the biggest industrial area in the market,” says De Mallie, “with warehouses and distribution centers, and a lot of the workforce lives there.”

It’s just a short drive from Whitehall to Carowinds, a major amusement park featuring Blackbeard’s Revenge, a six-story-high water slide complex; the Fury 325, a “giga coaster” that ascends to 325 feet; and, for the young ones to take flight, the Kiddy Hawk roller coaster.

Though it had long since been annexed by Charlotte, much of Steele Creek, in western Charlotte, remained farmland until the 2000s, when suburban sprawl took over. Infrastructure improvements have since spurred tremendous growth.

Best areas near Charlotte for investors

As the city expands outward, there has been new housing construction to meet demand, says De Mallie. So, in outlying areas, there will be many houses to invest in that are less than 20 years old, which presents fewer costs in repairs and upkeep.

“Many of these areas are blue-collar towns with decent median incomes,” he said.

Just 30 miles to the north of the center of the city, the town of Mooresville has seen speedy growth as Charlotte has expanded, its population rising from about 33,000 in 2010 to just over 50,000 last year.

With the history of textile mills in the Charlotte region, there are small mill neighborhoods in the town’s downtown that are “the coolest neighborhoods now,” says De Mallie. The economy in areas like Mooresville and Gastonia collapsed as mills went overseas in the 1990s, but they are “coming back in a big way.”

“Mooresville has an old-school downtown, and it’s on Lake Norman,” he says. “It’s where a lot of the NASCAR drivers live. You’ll see multimillion-dollar homes, but there are also quite a lot of nice, rentable houses.”

Charlotte was once the textile industry capital of the Southern Piedmont region. Gastonia was home to textile mills, and the mill neighborhoods in Gastonia, as in Mooresville, are attracting a lot of attention these days. Gastonia is growing slowly but steadily, with a current population of about 80,000, up from almost 72,000 a decade ago.

“All the outlying areas are getting redeveloped,” says De Mallie, “but in Gastonia it hasn’t happened yet, so that’s where the $90,000 homes are.” These may offer a higher return, he says, but also points out that they may need more work and bring more operating expenses.

Gastonia is home to the brand-new Fuse District Stadium, built at a cost of nearly $22 million to host the Gastonia Honey Hunters, the Atlantic League’s newest minor league team. Opening day was in May.

“This will be a huge entertainment district,” says De Mallie.

Situated just outside the I-485 loop, about 20 miles from the city center and just minutes from the University of North Carolina, Harrisburg has grown considerably over the last decade, from about 11,500 in the 2010 Census to just under 19,000 now.

This might be an ideal home for NASCAR fans: it’s just 3 miles from Charlotte Motor Speedway, where, in 2019, driver Mike Salinas hit 327 mph on the zMAX Dragway.

Though it’s still very small, this town just west of Lake Norman and about 30 miles north of downtown Charlotte has grown to about 3,300 from 2,300 a decade ago.

“It’s the last side of Lake Norman to be developed, so density is going to increase a lot there,” says De Mallie. “It’s probably one of the last places that is getting necessities like new grocery stores and a giant shopping center.”

Another town that has grown slightly via urban sprawl, Mint Hill, just 15 miles east of center city, has seen its population increase from about 22,700 in the 2010 Census to 26,450 in the most recent. Mint Hill residents can join the Pine Lake Country Club, where they play golf and tennis, or hike in the 281-acre Stevens Creek Nature Preserve.

“Mint Hill has a long-standing blue-collar community who have been there for decades,” says De Mallie.

“Indian Trail is another more rural working-class area that has been populated with urban sprawl and growth,” says De Mallie. “What used to be farmland is now suburbs populated by commuters.”

About 17 miles southeast of the city center, just outside the I-485 loop, Indian Trail boasts a Fourth of July parade that is one of the biggest in the metropolitan area.

Charlotte properties have appreciated a remarkable 56 percent in the last five years, and there’s still plenty of opportunity for investors in this up-and-coming city. 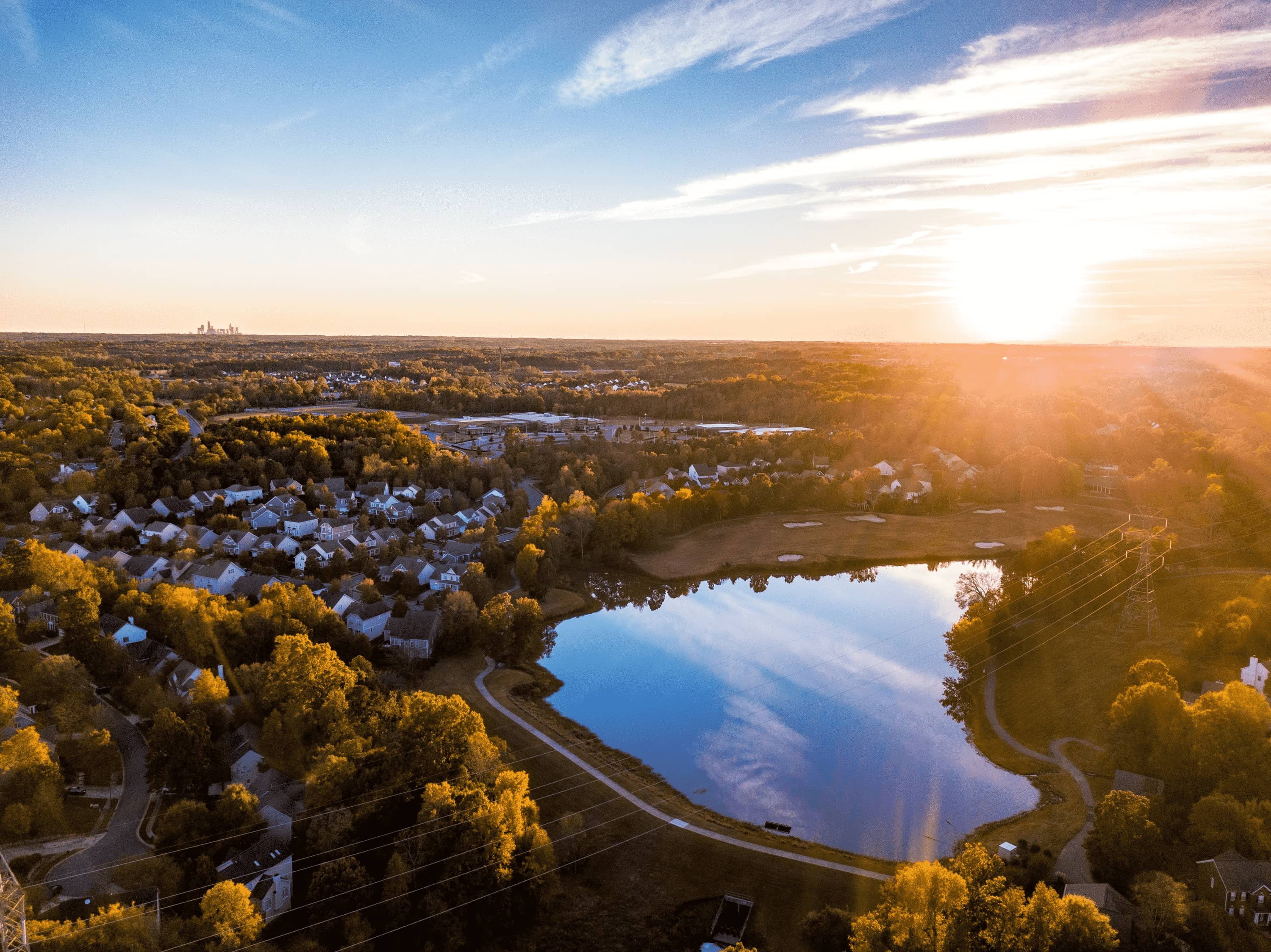